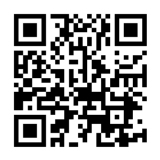 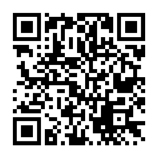 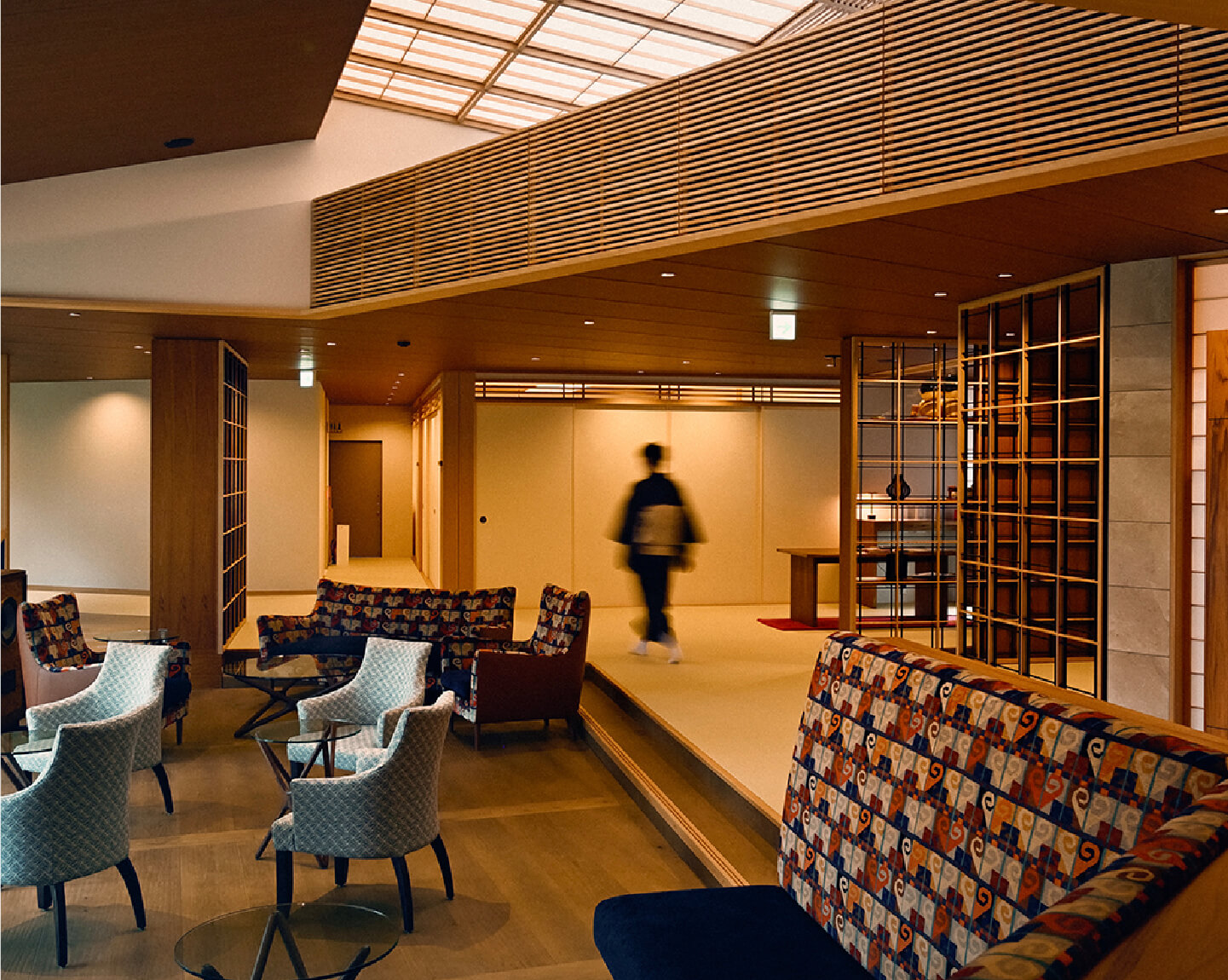 We welcome you with a new look for a new era which is based on 140 years of history.
Beniya is designed to feel open and spacious so you can relax and enjoy the peace while watching the changes of the seasons. 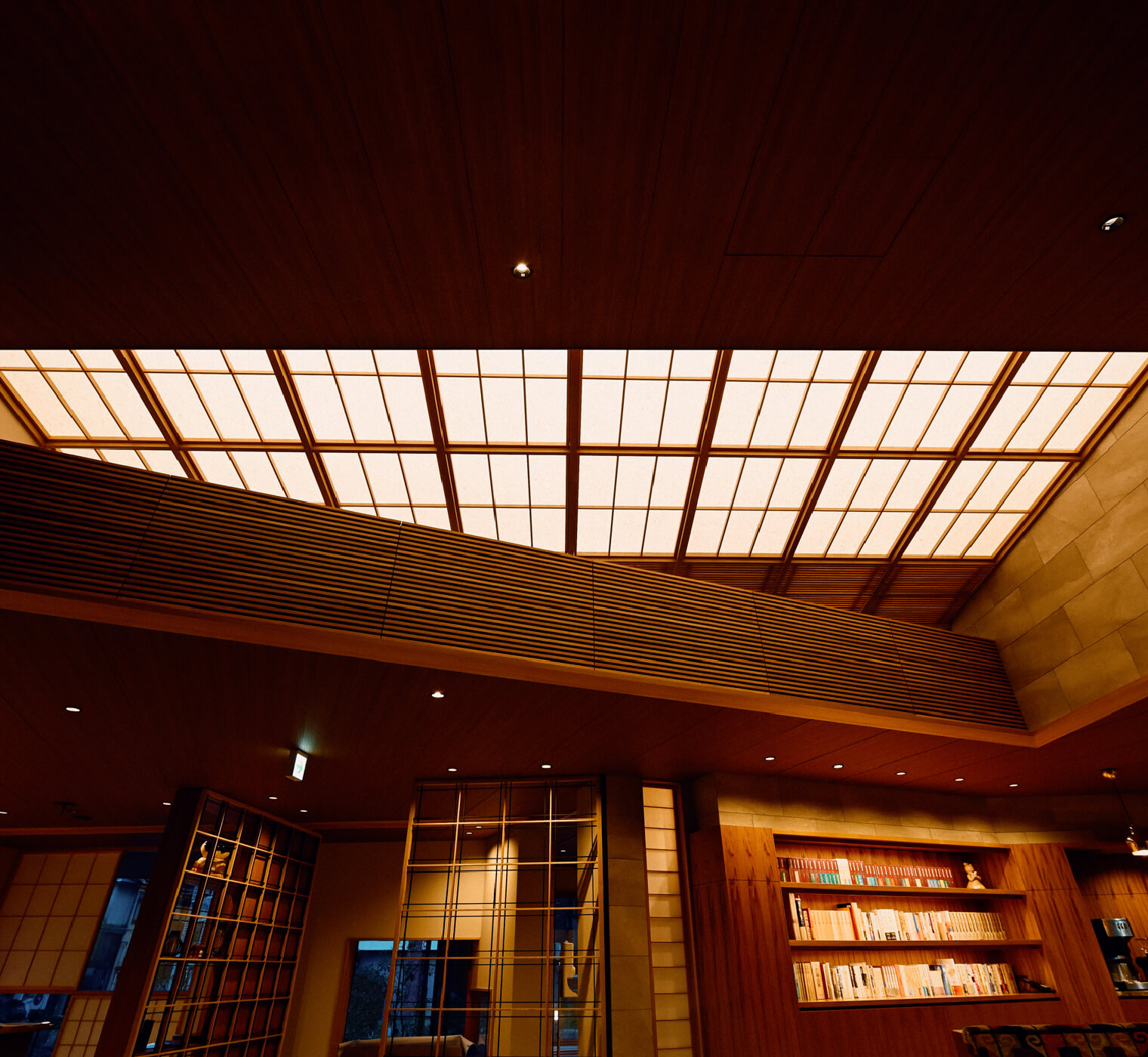 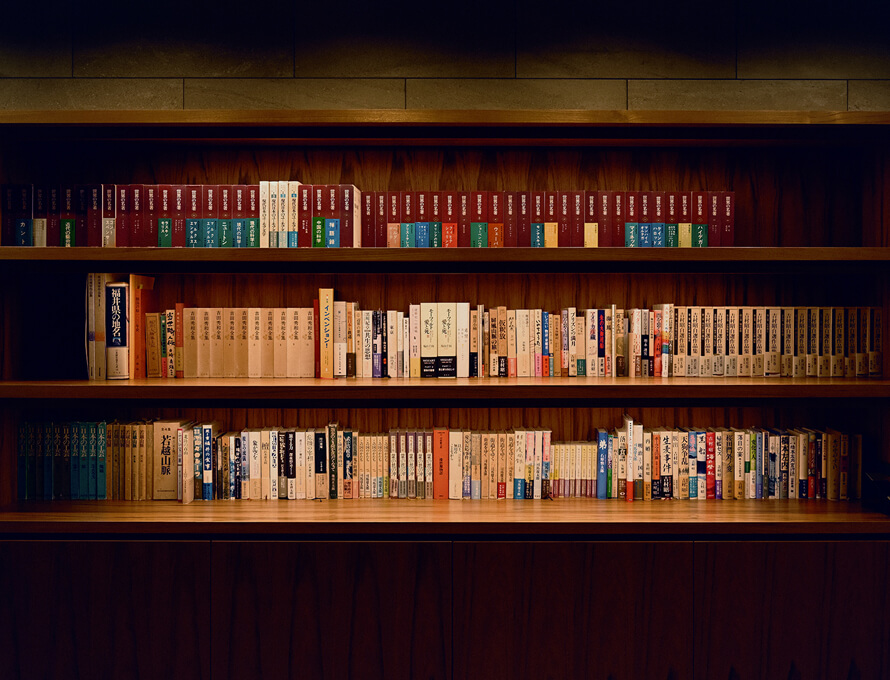 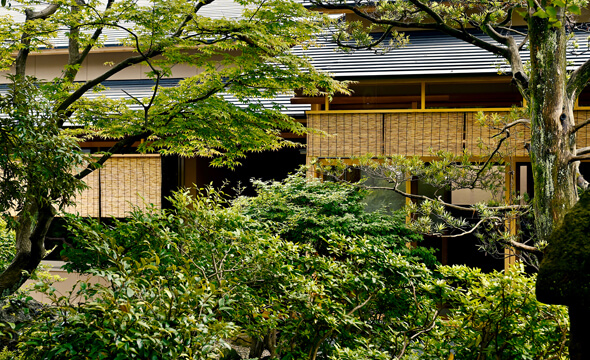 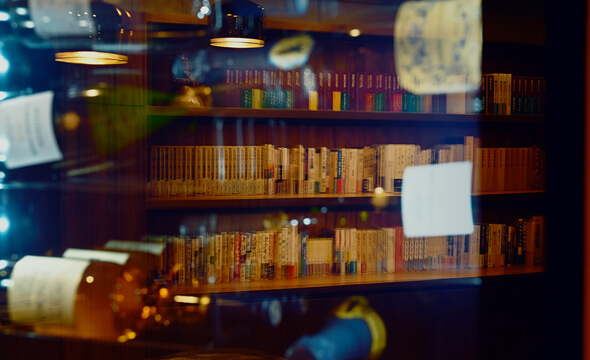 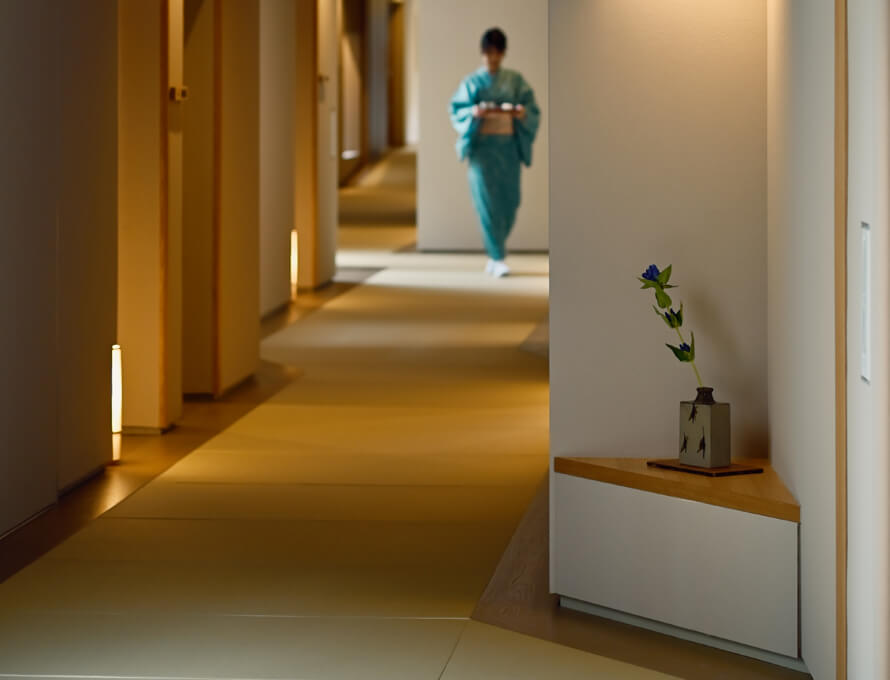 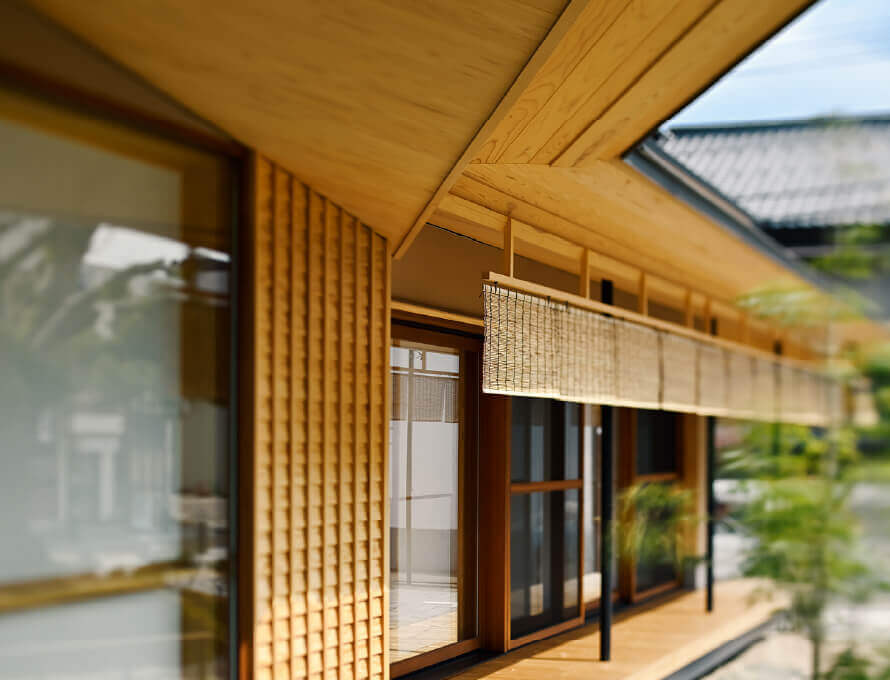 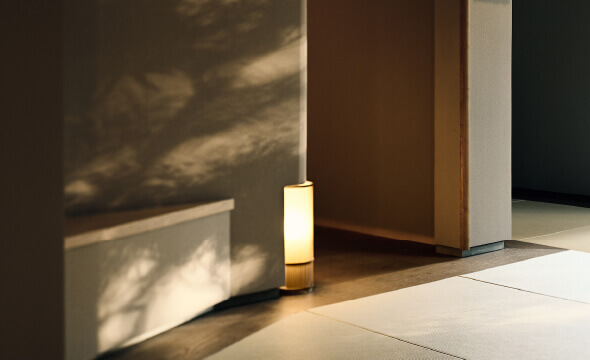 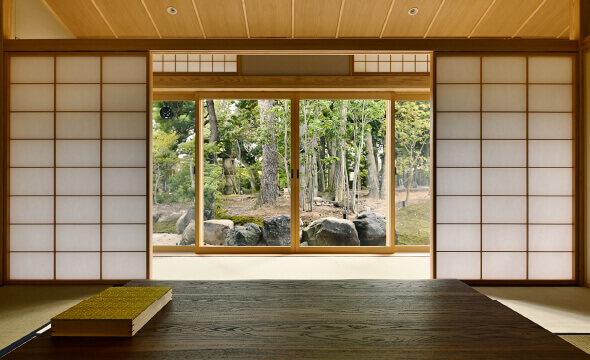 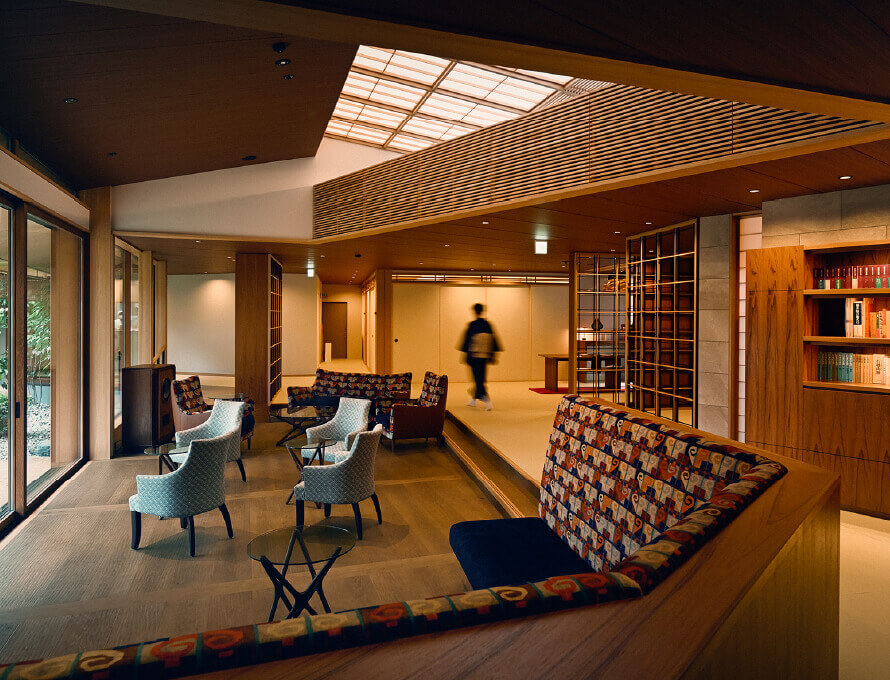 As well as the wonderful seasonal views from the lobby lounge, there are places here where an unexpected sight will make you want to stop and linger. These include wonderful examples of Japanese traditional art such as Echizen washi paper and Echizen tansu chests of drawers.
It is comfortable inside because the heat from the hot springs spreads throughout the whole inn. This means it remains warm even in winter.
Please enjoy the warmth in bare feet rather than slippers. 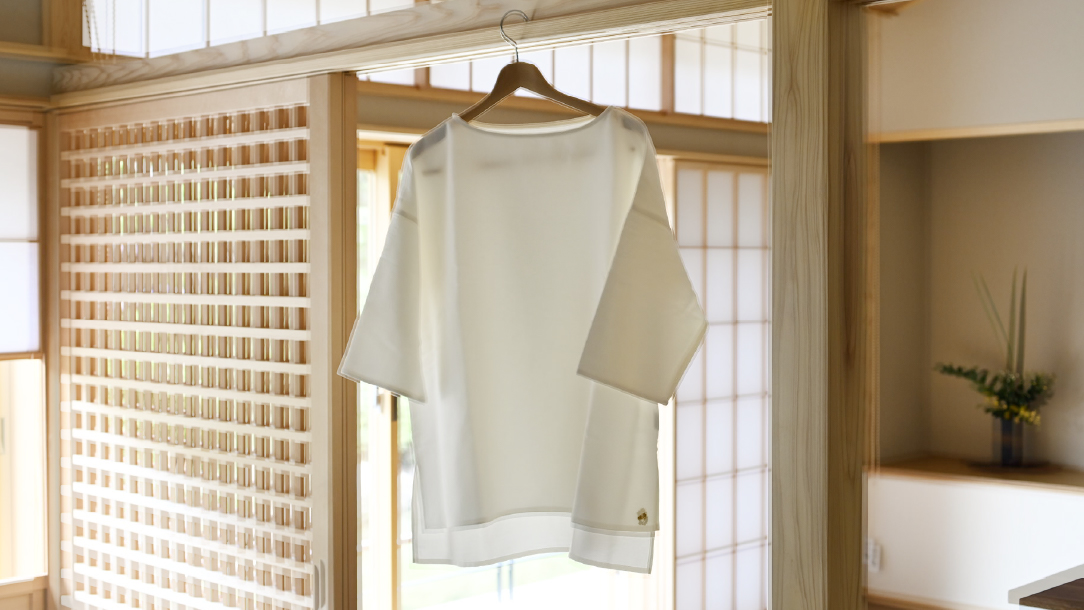 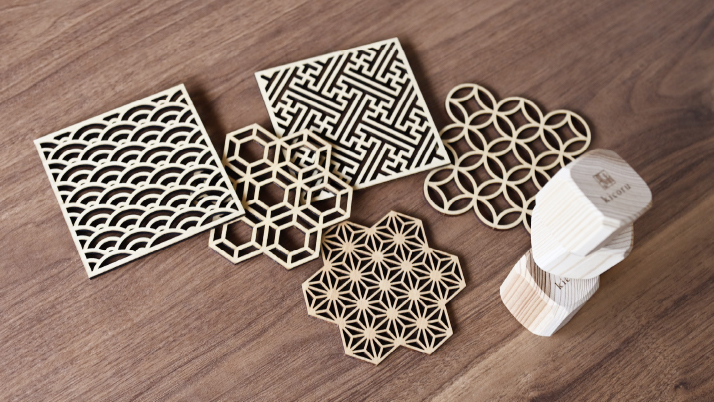 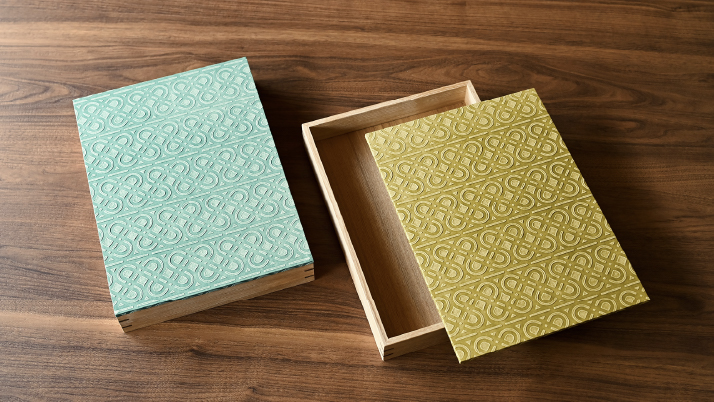 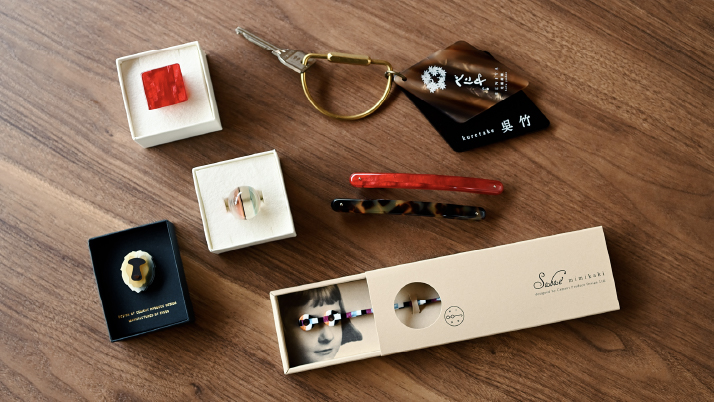 Accessories by KISSO
These accessories are made using cellulose acetate, which is commonly used for making frames for glasses. Cellulose acetate is a natural material derived from mainly cotton.
Manufacturer: KISSO Co., Ltd. [Sabae City] 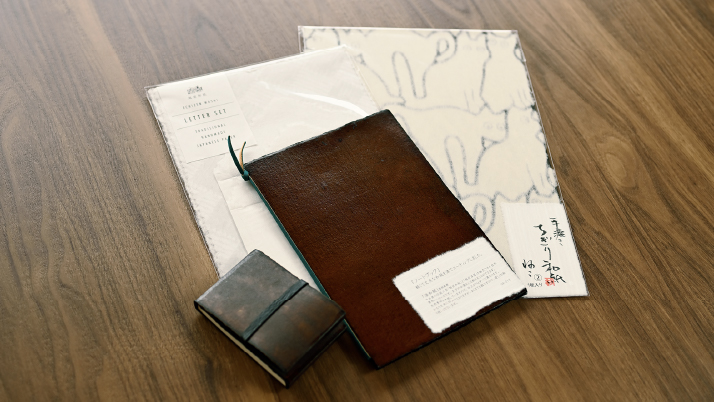 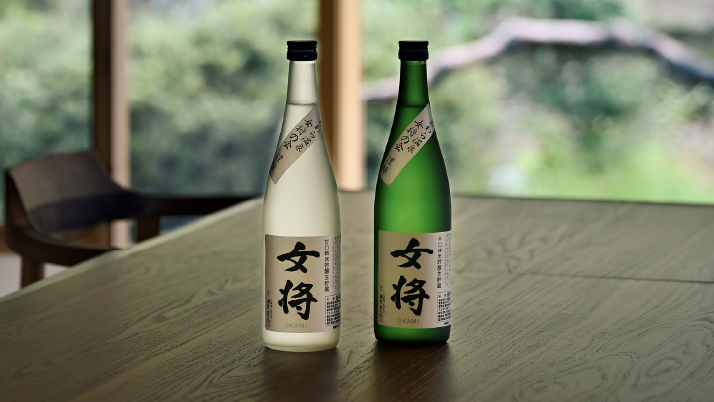 Sake “Okami”
Beniya’s Okami, a qualified sake taster, commissioned the production of this Junmai Ginjo Nama Chozo sake “Okami.” She was involved in every step of the process from planting the rice to brewing the sake.
Manufacturer: Kubota Brewery Ltd. [Sakai City] 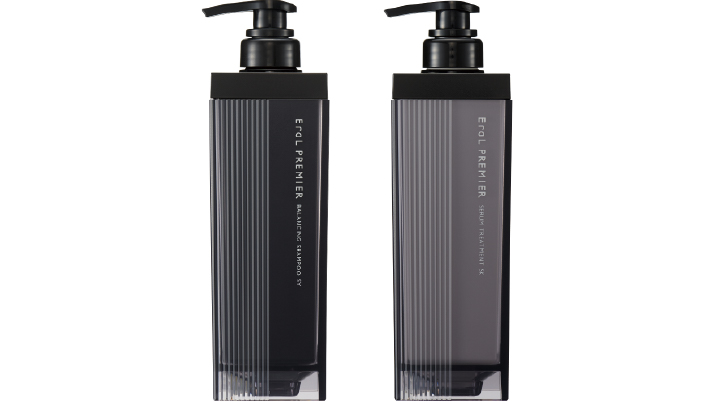 Eral PREMIER
The manufacturers carefully studied aging mechanisms before making these shampoos and conditioners. They are designed to enhance your natural beauty and to maintain the luster of your hair.
Manufacturer: Nicca Chemical Co., Ltd [Fukui City] / Eral Co., Ltd. [Minato-ku, Tokyo]

The Architect of Beniya

Light, Wind and Earth.
Taking advantage of the calm nature,
we can be close to people and think about them.
In such a Japanese inn.

My feelings toward Beniya Ryokan

I remember the first time I visited Beniya. It was a labyrinth of light. A long, dimly-lit corridor bent in a chevron shape with no end in sight. An endless stretch of eaves seen from the lobby. I instantly felt that I understood what makes traditional ryokans so attractive. There was an irrational sense of architecture as a collective body that has accumulated layers of time, and that had been organically expanded on an ad-hoc basis, which I had never felt in a newly-constructed building. I realized that the essence of ryokan is spaces that allow you to feel the changes of the times.

Time and climate have created a welcoming and comfortable place

It must be the connections and overlapping of many thoughts and feelings that create the place known as a ryokan. The place feels as if something more is there. Perhaps the building conveys the sense of the passing of time. The comfort of Beniya arises from the feeling of being protected by the climate of Awara, the long history of the building and the connections between all the people who have passed through its doors. I think that Beniya Ryokan will continue to be the embodiment of irrationality.

The building that connects and grows

Beniya continues to grow as a place where relationships between people are built, thoughts are linked and gentle connections are valued. As a person involved in the construction of new buildings, what I have aimed for is an architecture that can grow into the future, with a structure that can be expanded and renovated.

Never leave, stay neither too close nor too far

The new Beniya has 17 rooms, all with different designs. This is not much for a ryokan, but there are still plenty of places where you can find a small but comfortable retreat. You can be alone if you wish, but not necessarily lonely. I designed the building so the staff can care for the guests with the spirit of “Never leave, stay neither too close nor too far”.

Based on the structure where each guest room is semi-detached, natural light can reach all the guest rooms, even the bathrooms. The corridor was designed so you can experience the world of light and darkness. A small tsuboniwa garden between the guest rooms allows the breeze from the Fukui Basin to flow through the inn. A tsuboniwa is like a universe. The presence of the tsuboniwa ties together all the design elements into a harmonious whole which then suggests further changes to layouts and finishes for all the rooms. The corridor design, where it is subtly angled so the end cannot be seen, reflects the experience I had when I first visited Beniya. 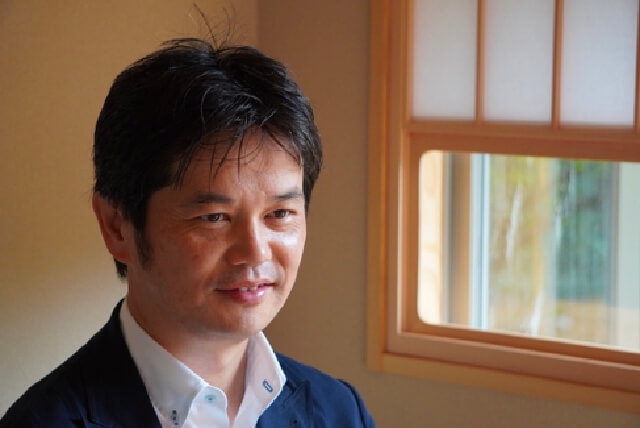